On the morning of March 29th, Prof. HU Zhenghuan, a member of the first generation of USTB graduates and member of the Chinese Academy of Engineering (studying in the Department of Mechanics from 1952 to 1956), and his wife Ms. YU Xuezi (studying in Department of Mechanics from 1956 to 1960) donated ¥3,000,000 to USTB Education Development Foundation and established “HU Zhenghuan-YU Xuezi Education Fund”, in support of the educational development and talent cultivation of USTB. The ceremony was held in Conference Room 306 of the Administration Building. 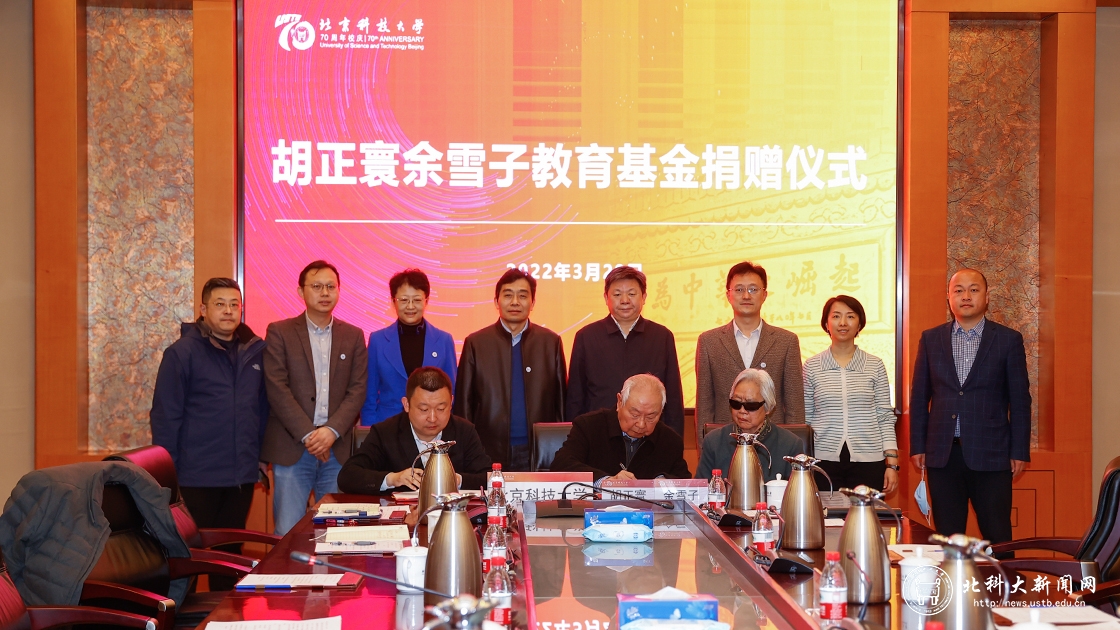 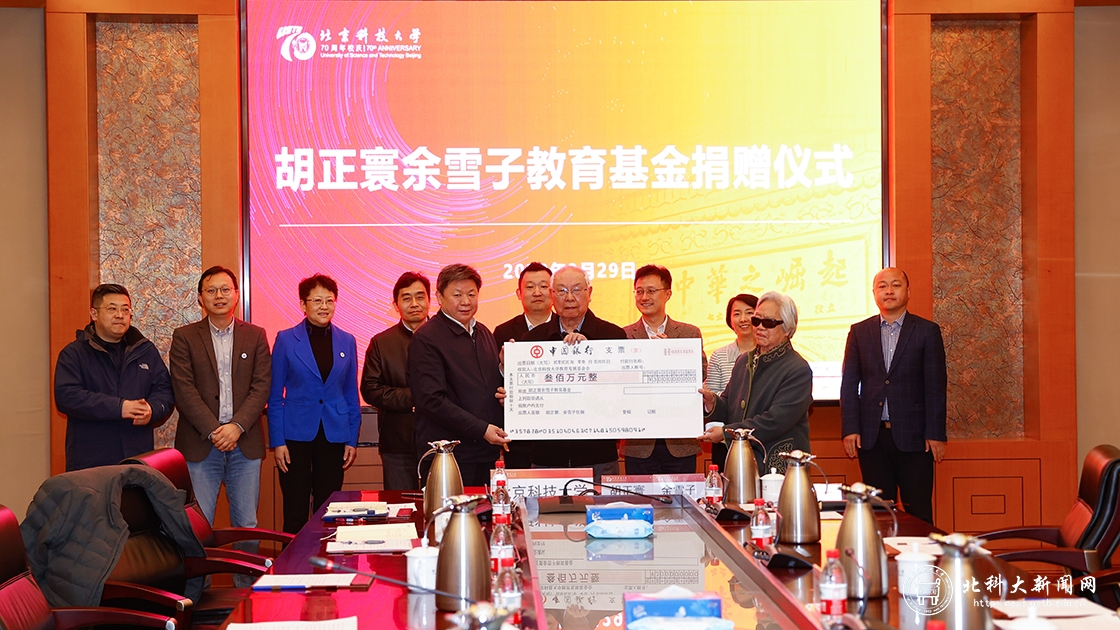 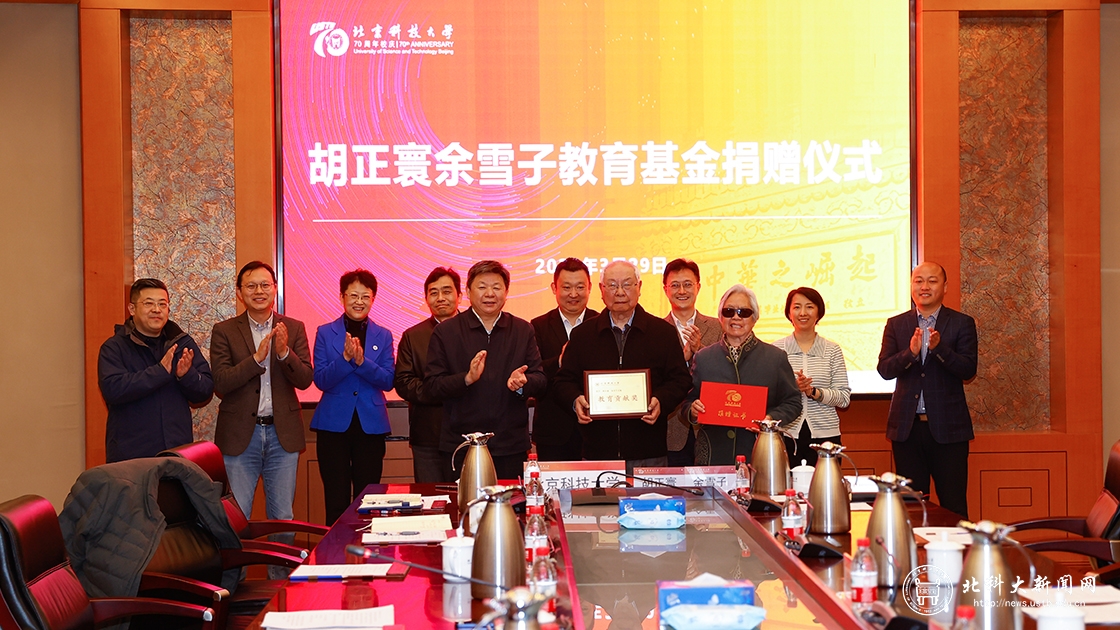 Prof. YANG Renshu, on behalf of USTB, awarded Prof. HU Zhenghuan and Ms. YU Xuezi with the donation certificate, as well as a "Memorial Medal for Educational Contribution"

At the ceremony, Prof. WANG Luning signed the donation agreement with Prof. HU Zhenghuan and Ms. YU Xuezi. On behalf of the university, President Yang received the gift check and awarded Prof. Hu and Ms. Yu with a donation certificate, as well as a "Memorial Medal for Educational Contribution". 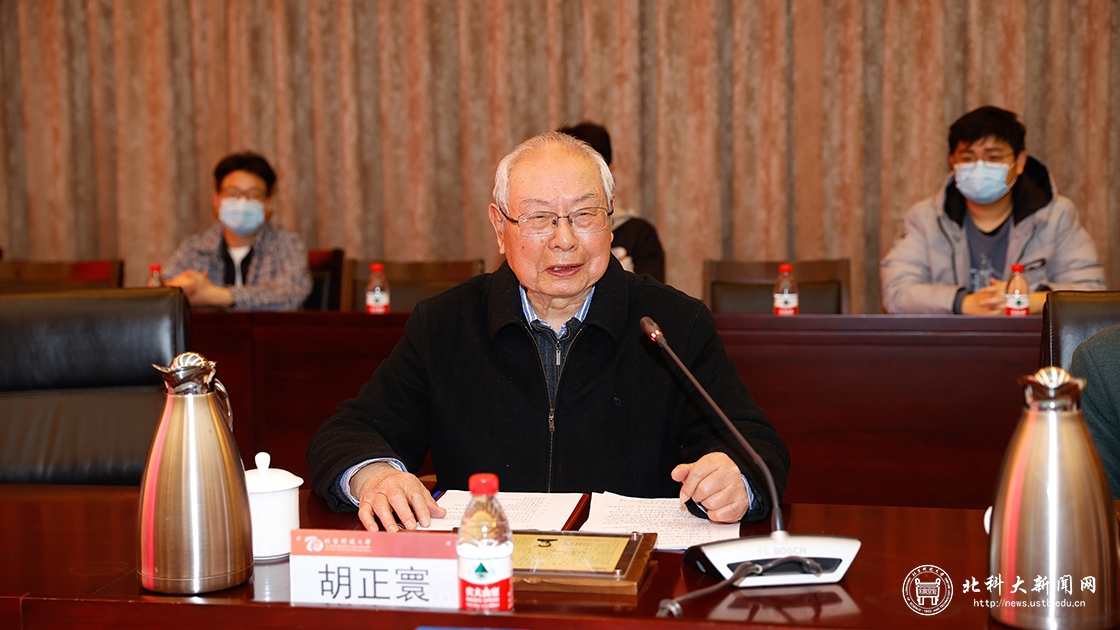 In his speech, Prof. HU said that the development of the country cannot be separated from scientific research, and the value of scientific results lies in its contribution in supporting social and industrial progress. The future of our country depends on the young generation. On this special occasion of the 70th anniversary celebration of the founding of USTB, he, with the heart to give back to the university and the earnest expectation for the young students, set up “HU Zhenghuan-YU Xuezi Education Fund” as a way to thank his Alma Mater for cultivating and supporting him and his wife in the past 70 years. The fund is established to reward students who have outstanding achievements in academic and scientific research, encouraging them to combine their personal ideals with the fate of the country, to be firm in their beliefs, to have their feet firmly on the ground, to devote themselves to scientific research, and to serve the society with all their efforts.

Prof. HU recalled the seventy years he spent at USTB. When he was still a student, he showed a thirst for learning and knowledge. After graduating in 1956, he decided to be a teacher of Metallurgical Machinery at Beijing Institute of Iron and Steel Technology (subsequently, University of Science and Technology Beijing). In 1958, when he was reviewing literature from the Soviet Union, he discovered the world's newest craft at the time, skew rolling technology. He realized that if this technology was applied to the mechanical part manufacturing industry, it would be "revolutionary". Deciding to overcome the technical difficulty of “steel ball forming by skew rolling”, Prof. HU, together with his colleagues, working overtime day and night for more than 100 days, finally completed the design and manufacture of the rolling mill, and successfully made several good steel balls. With the strong support from the university, the research team led by him has gradually turned its scientific results into industrial production. Prof. HU said that the achievements he has gained could not be separated from the training and support of his Alma Mater, and now he feels very honored to give back and support the development and construction of the university. 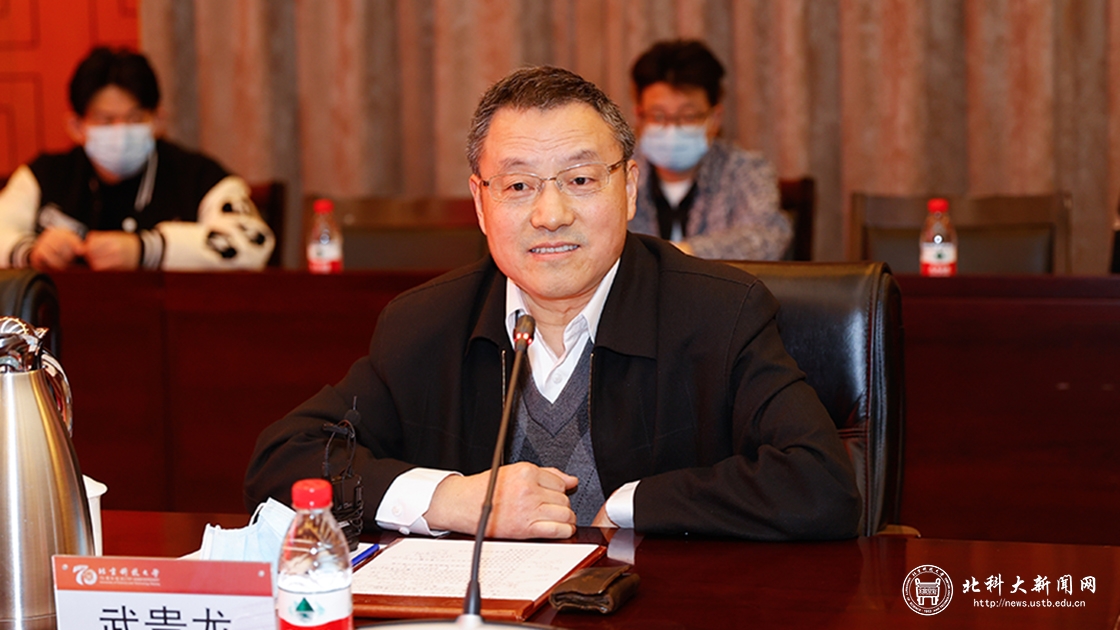 In his speech, Mr. WU expressed his respect and sincere thanks to Prof. HU Zhenghuan and Ms. YU Xuezi. Prof. HU, as the first generation of USTB graduates, has witnessed great changes of the university over the past 70 years. Prof. HU’s donation to his Alma Mater is significant and touching, especially on the occasion of the 70th anniversary celebration of the founding of USTB. As the main pioneer and founder of part rolling technology, he has devoted his life to the research, development and promotion of part rolling technology (cross wedge rolling and skew rolling), and taken the “transformation of scientific research into productivity” as his lifelong pursuit. Doubtlessly, he has made great contributions to the development of China's mechanical manufacturing industry.

Mr. WU said that Prof. HU has kept himself going at the forefront of scientific research at the age of 88, not only following the project every day, but also participating in some small and specific matters such as testing the machine. Decades of his deep research has promoted a number of important scientific results, and delivered a large number of outstanding talents for the society. Prof. HU's dedication and devotion are admirable, serving as a model for students in their studies, their work, and their lives. USTB will make good use of the fund to help cultivate high-level talents and to raise the high-quality development of the university.

As the main founder of part rolling technology in China, Prof. HU has been granted 4 national awards and over 10 provincial and ministerial awards, such as the National Excellent Scientific and Technological Worker, and the Honorary Academy Award of Metallurgical Science and Technology, Science and Technology Achievement Award, etc. The research team led by him, reaching at a world level right now, has been devoted to part rolling technology research since 1958. His outstanding contribution to this technological field has also been recorded in the Selection of Science and Technology Achievements of the PRC (1979-1988). The team helped establish nearly 300 parts rolling production lines in more than 27 provinces, within which 18 lines were exported to the United States, Japan, and other countries. More than 500 kinds of parts have been developed and produced, with a total production capacity of more than 6 million tons, an output value of more than 50 billion yuan, and saving more than 600,000 tons of material through increased efficiency, creating remarkable economic and social benefits.

Prof. HU once said that even after retirement, he would rather spend his time on research than traveling around because it’s a matter of happiness and fulfillment. His persistent passion and perseverance in science have infected every student around him. 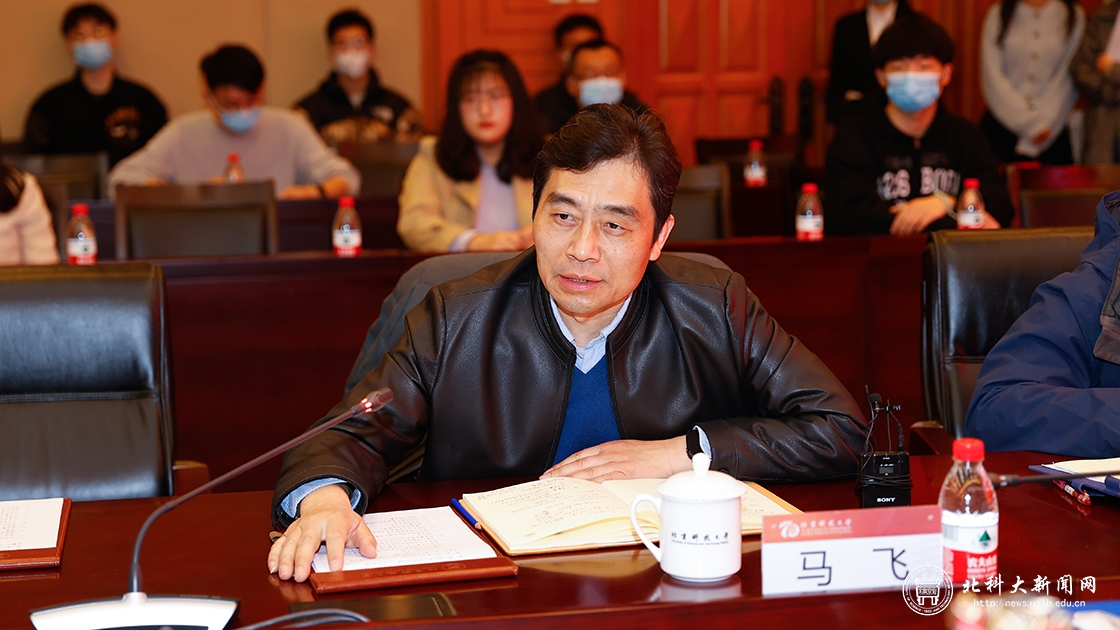 On behalf of all the faculty and students of the School of Mechanical Engineering, Mr. MA, in his speech, said that Prof. HU is a role model for his dedication to and pursuit of scientific research. We will carry forward his spirit to forge ahead and cultivate more talents for the society and the country. 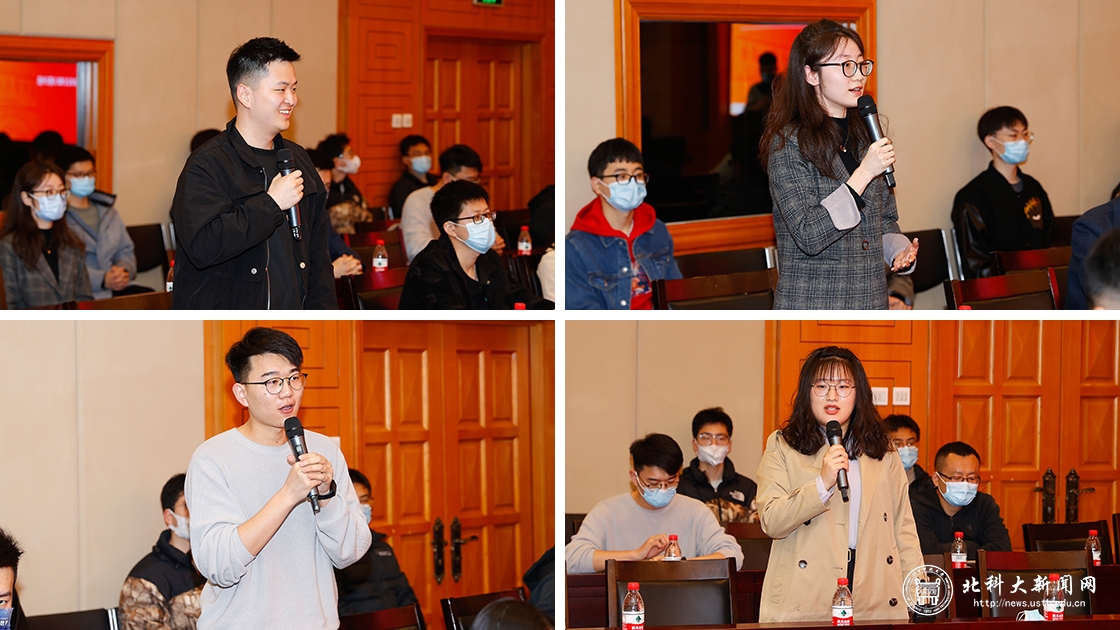 Student representatives speaking at the ceremony

Students from the School of Mechanical Engineering and School of Economics and Management said that Prof. HU’s spirit and dedication to science will be their motivation when they are moving forward on their academic path. He has provided them with support and guidance so that encouraging them to serve the society and contribute to the country. 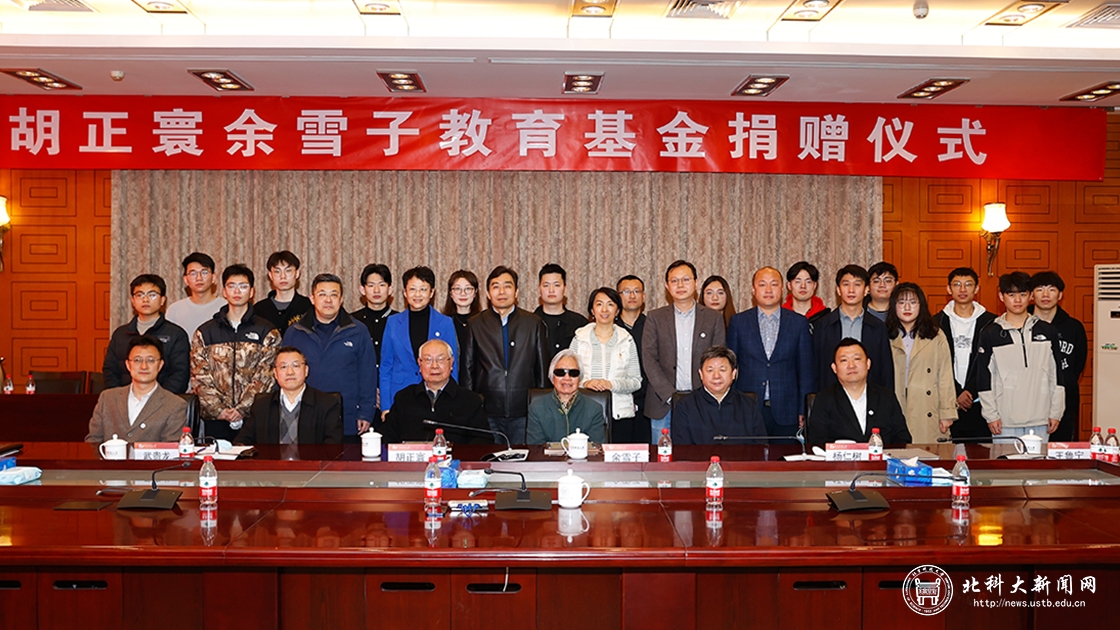 The year 2022 has witnessed USTB’s development and tremendous changes over the past seven decades. The fund from Prof. HU Zhenghuan and Ms. YU Xuezi is their gift to the university, and Prof. HU’s spirit of teaching and scientific research will continue to encourage all the faculties and students in the future. Taking Prof. HU as the model, USTB students are going to shoulder their responsibility for the society and contribute to the development of the country.

“Time spent at USTB has passed like an arrow. Looking back on these seventy years, I feel very happy that I have dedicated most of my life to this land, which has nurtured me and made me who I am,” said Prof. HU Zhenghuan.