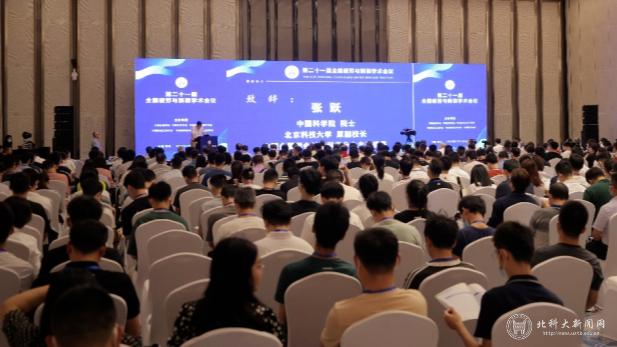 The Conference is a major academic event held every two years in the field of fatigue and fracture research in China. At the opening ceremony, Academician ZHANG Yue, chairman of the Conference, and Mr. WANG Xinjiang, Vice President of the CSM, delivered speeches, respectively. Prof. ZHANG Yue introduced the importance of the study of fatigue and fracture to national economic development and engineering construction of China, reviewed the history of the development of the Conference, and put forward expectations and good wishes for the Conference. Mr. WANG Xinjiang expressed a warm welcome and sincere gratitude to the participants on behalf of the CSM and introduced the achievements of the CSM in academic exchanges, scientific and technological consultation and promotion, and engineering education certification in the field of metallurgical engineering and materials science over the years. The opening ceremony was presided over by USTB Professor SHANG Jiacheng, Director of the Academic Committee of the Conference and Secretary General of the CSM.

With 620 registered delegates, nearly 400 reports were received, and more than 66,000 people watched the live stream of the Conference online; the Conference has the largest scale and the broadest range of topics in its history. The Conference invited ten scholars who have made outstanding contributions in the field of fatigue and fracture to give keynote reports and share their scientific research experiences and latest achievements. A total of 7 sub-conferences were set up, covering different frontier areas of the Chinese national economy and scientific research, including: “Fatigue and Fracture Mechanics,” “Theory of Fatigue and Structural Failure in Engineering Materials,” etc. A total of 49 invited presentations and 320 academic presentations were arranged in the 7 sub-conferences to exchange the latest research achievements and development trends in the field of fatigue and facture in recent years. More than 30 domestic and foreign well-known enterprises related to fatigue and fracture participated in the exhibition.

The Conference attaches great importance to academic exchanges and result sharing between different disciplines, bringing together experts and scholars from different fields such as materials science, mechanical engineering, civil engineering, etc. The Conference provided an important learning and exchange platform for researchers, it broke the boundaries of disciplines, and through academic exchanges and discussions in different disciplines, the Conference promoted the original innovation and major breakthroughs in key and core technologies in the field of fatigue and fracture research in China. The Conference has further strengthened exchanges and cooperation among experts and scholars and promoted the integration and development of cross-discipline research on fatigue and fracture, and better served the major national needs and national economic construction.