On the afternoon of May 16, USTB held a symposium to study the spirit of the important speech made by President XI Jinping at the conference celebrating the 100th anniversary of the founding of the Communist Youth League of China.  Mr. WU Guilong, Chancellor of USTB, and Prof. ZHENG Anyang, Vice President of USTB, attended the meeting. Responsible officials from the Department of Student Affairs and the Department of Admissions and Career Services, all full-time and part-time comrades from USTB Communist Youth League Committee, Associate Secretary General of Student Affairs and Secretary General of the Communist Youth League Committee under each school, Secretaries of the Young Teachers Committee and representatives of the league members,  and other 200 young teachers and students attended the meeting. Prof. ZHENG Anyang presided over the meeting. 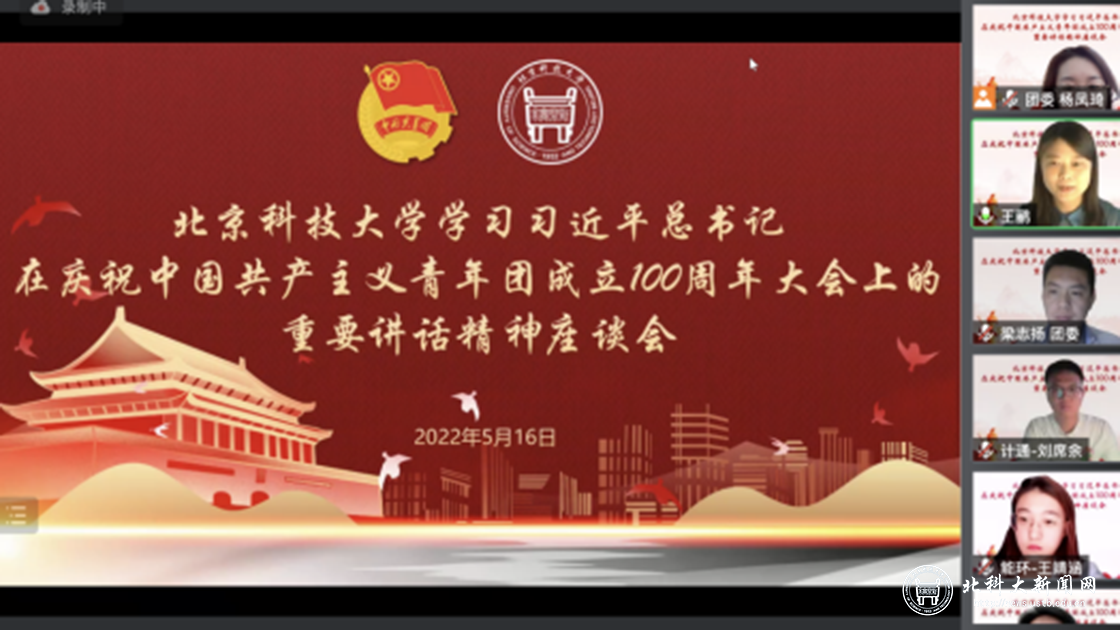 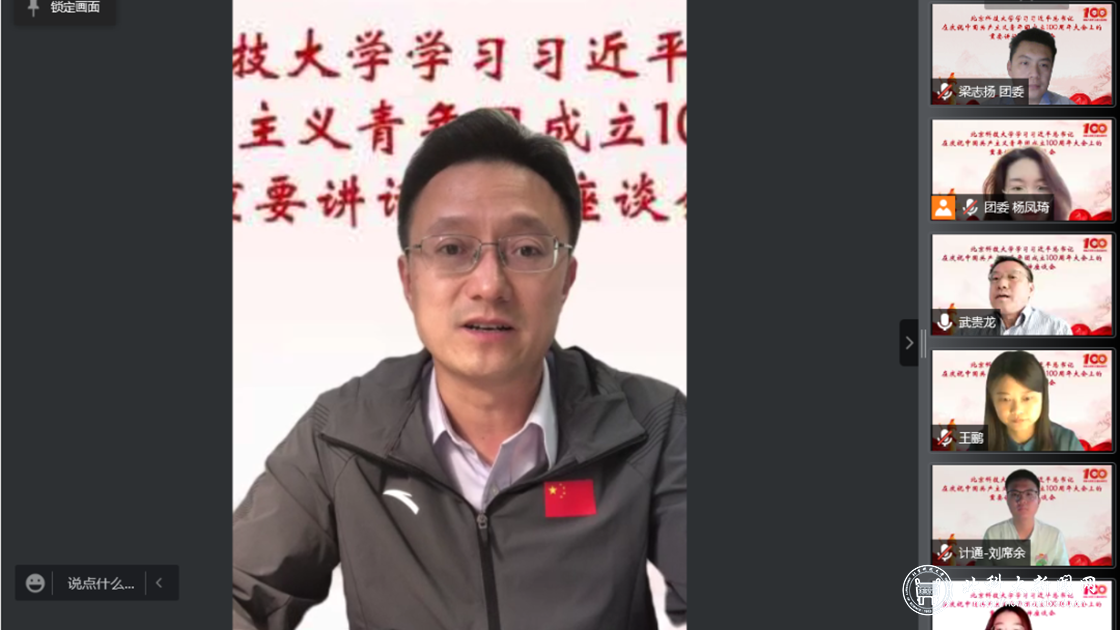 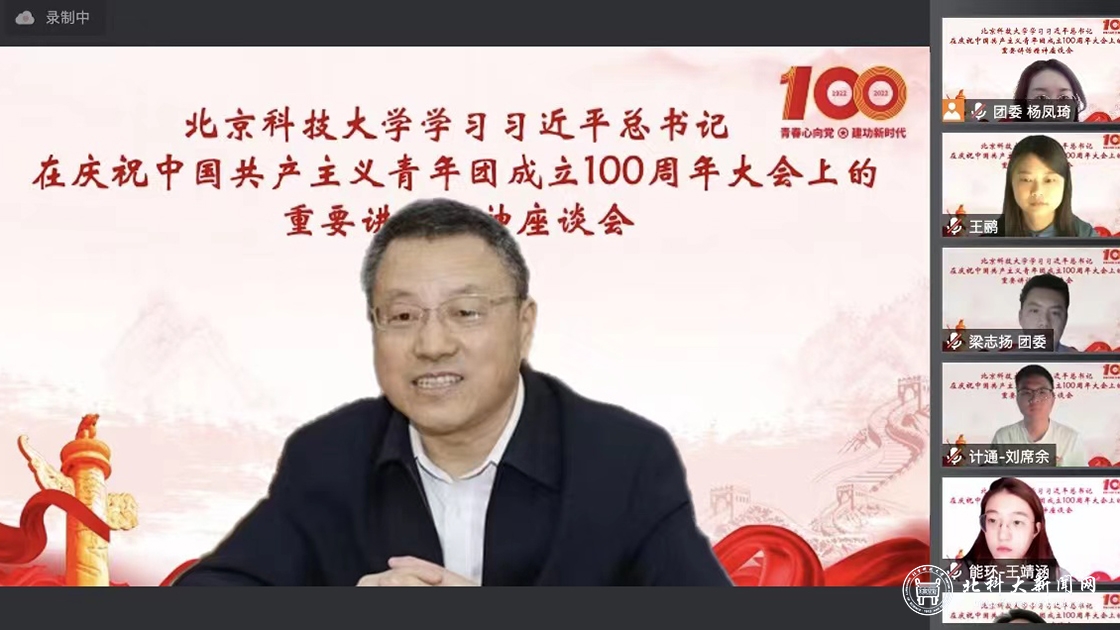 The youth representatives shared their thoughts from learning the spirit of President XI Jinping's important speech with their own experiences. Mr. LIU Lin, Secretary of the Youth League Committee of the School of Mathematics and Physics, said that he would bear in mind the teachings of President XI and give full play to the cultivating function of the Moral Curriculum in the teaching process, to inspire and guide students to pursue the truth, climb to the top and serve our country with science and technology, and cultivate more high-quality talents with dedication and steel bones for our country. Ms. YAO Huiying, deputy secretary of the Youth League Committee of the School of Materials Science and Engineering and counselor of the Beijing May Fourth Red Flag Youth League Committee, said that in the future, she would focus on the central work of USTB and the school and carry out a series of learning activities for the centenary of the founding of the Youth League through multiple platforms and forms, and strive to lead, visit, serve and unite the youth. Ms. LI Xiang, an outstanding member of the Beijing Youth League and an undergraduate student of the Department of Sociology in the School of Humanities and Social Sciences, said that new youths in the new era should actively participate in the modernization of the motherland, such as rural revitalization, social security, and scientific and technological innovation, and use our knowledge and expertise to the construction of the motherland. LIU Xiyu, a student of the third “Truth-Seeking Project”, a member of the 24th Postgraduate Teaching Corps, and secretary of the Youth League Branch of the School of Accountancy and Communication, said that he would bear in mind President XI Jinping’s ardent wish in his teaching in the coming year and contribute his youthful power to cultivate more ideal, competent and responsible newcomers of the times. 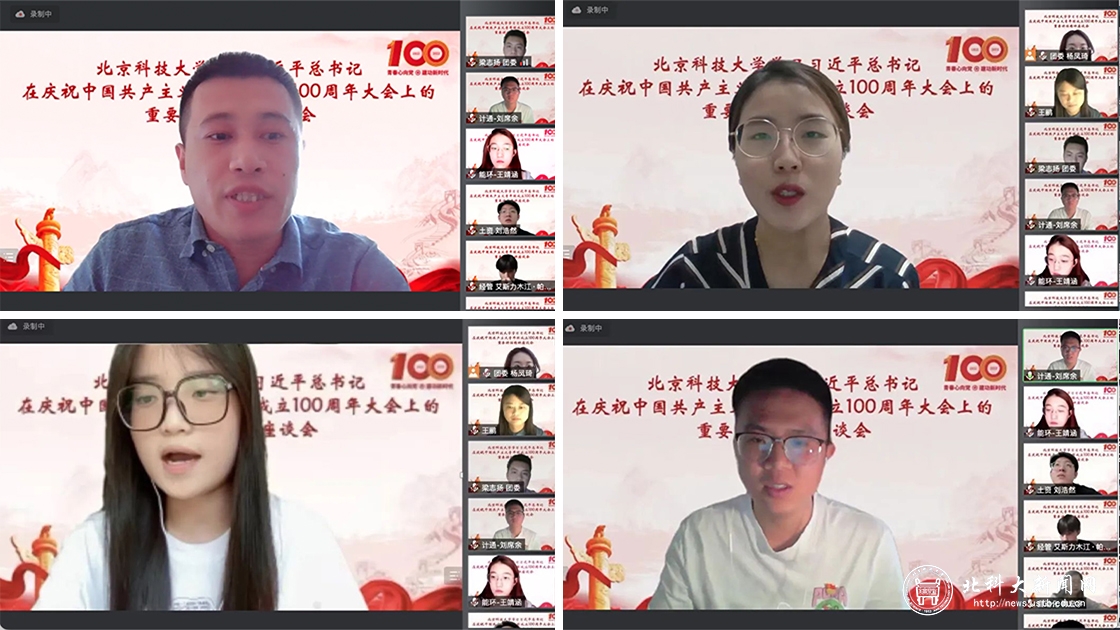 Statements by representatives of young students and teachers at the conference

Ms. WANG Li, the Secretary General of the Communist Youth League Committee, read out the decision to establish a theoretical lecture group for young students and teachers. She pointed out that the group will focus on the Party’s innovative theories, strategic deployments, and major initiatives, the current political hot-spots and intellectual confusions of young people, and make the spirit of President XI Jinping’s important speech clear, alive, and concrete in a way that young people can understand and remember. At the same time, USTB Youth League Committee will use the new media platform to publish learning experiences and commentary articles, and design and launch a series of cultural products to create a strong atmosphere of “learning, thinking and practicing”, so as to welcome and learn and implement the 20th Party Congress with practical actions. 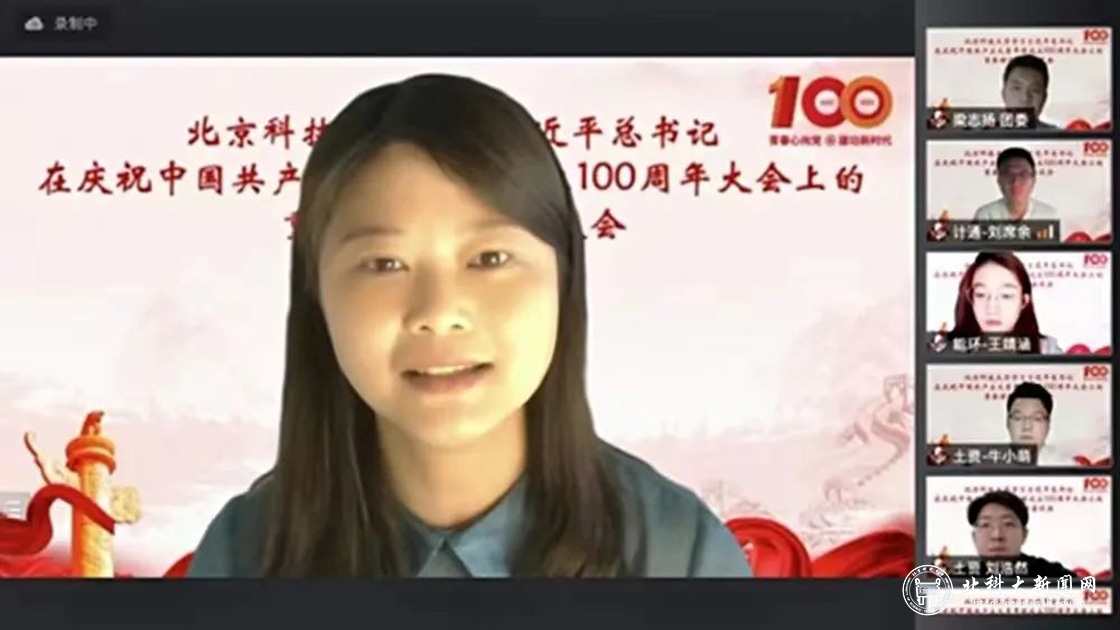 The Executive President of the USTB Student Union and the 12th Inspirational Programme participant, Ms. HUA Hui, made a declaration on behalf of all the USTB youth. She called on us to study the important speech made by President XI Jinping at the conference celebrating the 100th anniversary of the founding of the Chinese Communist Youth League, strengthen our theoretical knowledge, forge ahead and innovate in constant learning, refine our skills and strive for hard work in careful study and practice, and fully demonstrate the responsibility of youth in the new era. 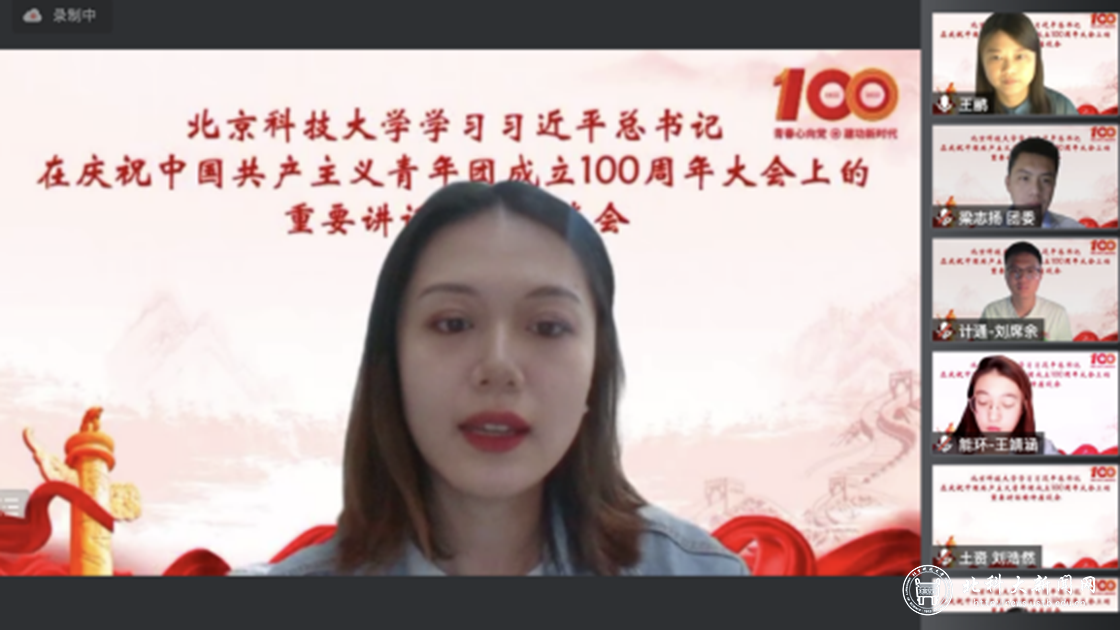 Recently, USTB has started to study the spirit of President XI Jinping’s series of speeches. All teachers and students have been studying the “Spirit of President XI Jinping’s important letter to the senior professors of the University of Science and Technology Beijing”, the “Spirit of the important speech during the inspection at the Renmin University of China” and the "Spirit of the important speech at the celebration of the 100th anniversary of the founding of the Communist Youth League” in a multi-faceted, integrated and systematic manner through the thematic party and group classes, theoretical lectures, and group seminars.  In the next step, the USTB party and league organizations at all levels will further carry out a series of in-depth study activities, and guide young teachers and students to understand the spirit and grasp the core meaning, effectively putting the spirit of President XI Jinping’s important speech into practice, and gather the majestic power of nurturing people for our Party and our country.