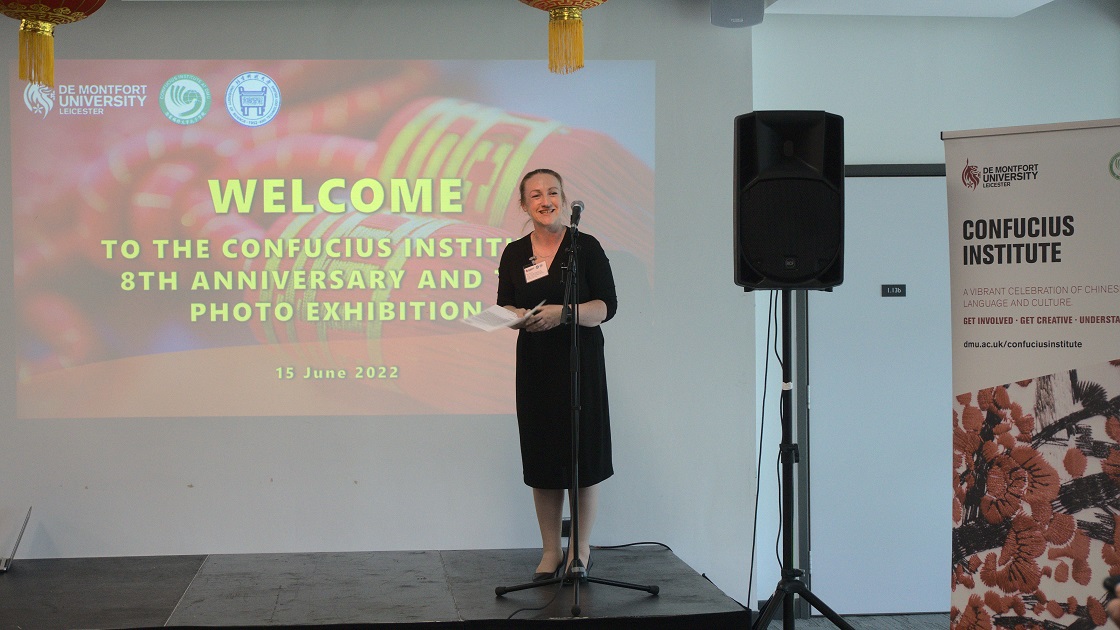 Vice Chancellor Normington extended a warm welcome to all guests and congratulated the CI on its achievements and also the launch of the photo exhibition of its history. She spoke highly of the CI’s remarkable role in facilitating so many cooperative and exchange programs between DMU and USTB, in providing diversified Chinese courses for local schools, offering multi-level credit and non-credit Mandarin courses for DMU, and in enriching the cultural diversity at DMU and beyond. The VC expressed her full support for the CI and her thanks to all the CI staff and partners. 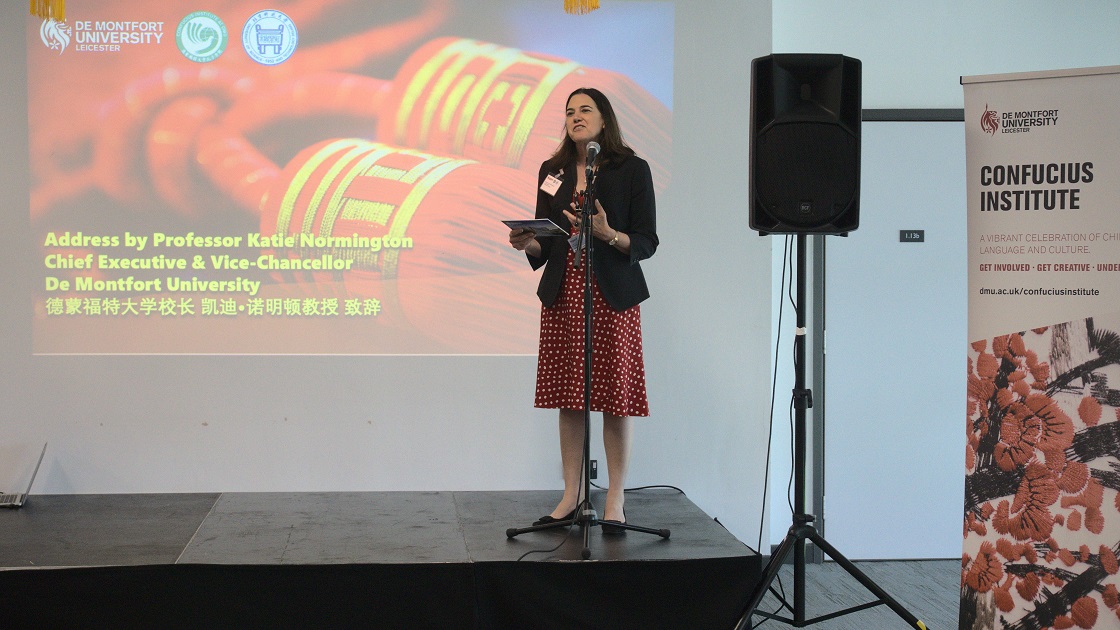 Minister Counsellor ZHANG Jin extended warm congratulations to the CI and on the launch of the photo exhibition of its eight-year progress. She thanked USTB and DMU for their constant support for the CI over the years. She hailed the CI’s efforts during the pandemic to overcome difficulties, deliver online courses, innovate operating procedures, and end up with richer experiences for a better future. It was her hope that, on the occasion of the 50th anniversary of the establishment of China-UK ambassadorial diplomatic relations, the CI will do its best to deliver more adaptable teaching programs and cultural events so as to boost mutual understanding between cultures and effective people-to-people connectivity, benefiting more people at DMU and in the UK. 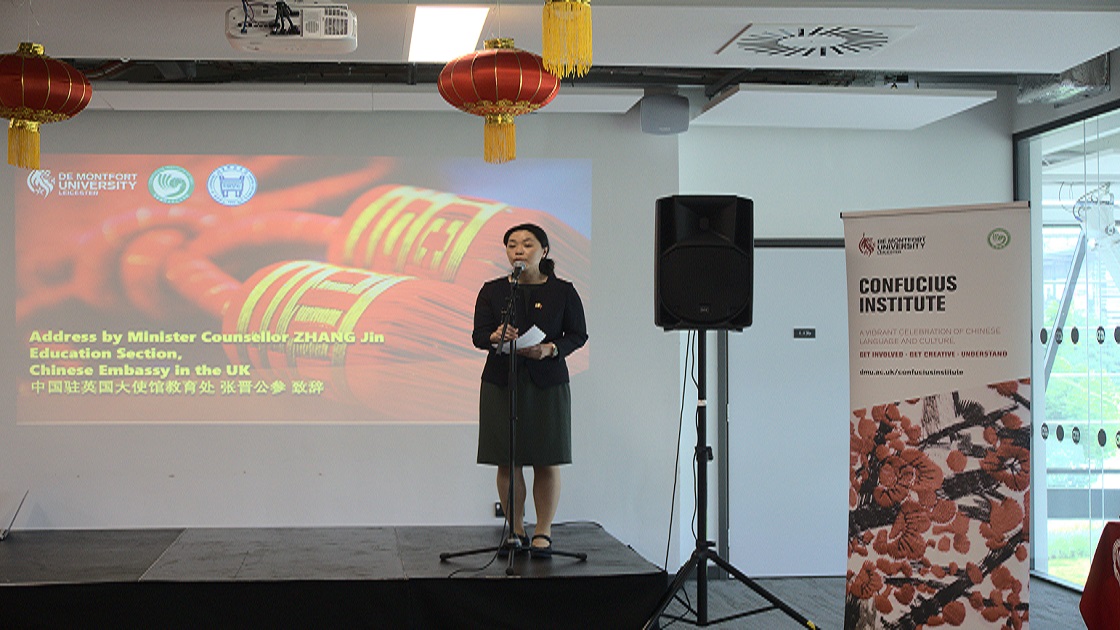 PVC Simon Bradbury, also one of the first DMU Senior Staff Mandarin Class, reviewed the local and international publicity of the CI on mainstream public broadcasting and new media platforms over the years: the establishment of the first Confucius Classroom, Chinese New Year parades, the joint celebration of the CI’s fifth anniversary, the 33-day 4-city tour exhibition of Chinese paintings, Leicester Mayor gracing the Saturday morning Tai Chi class, local children’s chorus for the Year of the Tiger, the “Special Jury Award” the CI won at the UN Chinese Language Day Overseas Video Festival, and so on. He is proud of the CI’s progress against the pandemic: the first GCSE Chinese class, the third prize won at the “Chinese Bridge” UK Finals, so many joint academic lectures in-person and online, Chinese Novel Book Club, Summer Schools at USTB, joint “Chinese Bridge” Online Exchange Programs, updates of CI webpages at both universities, the first Martial Arts Summer Class for Children, etc. All are best summarized in the 8-year photo exhibition. The PVC has good reason to expect a brighter future for the CI. 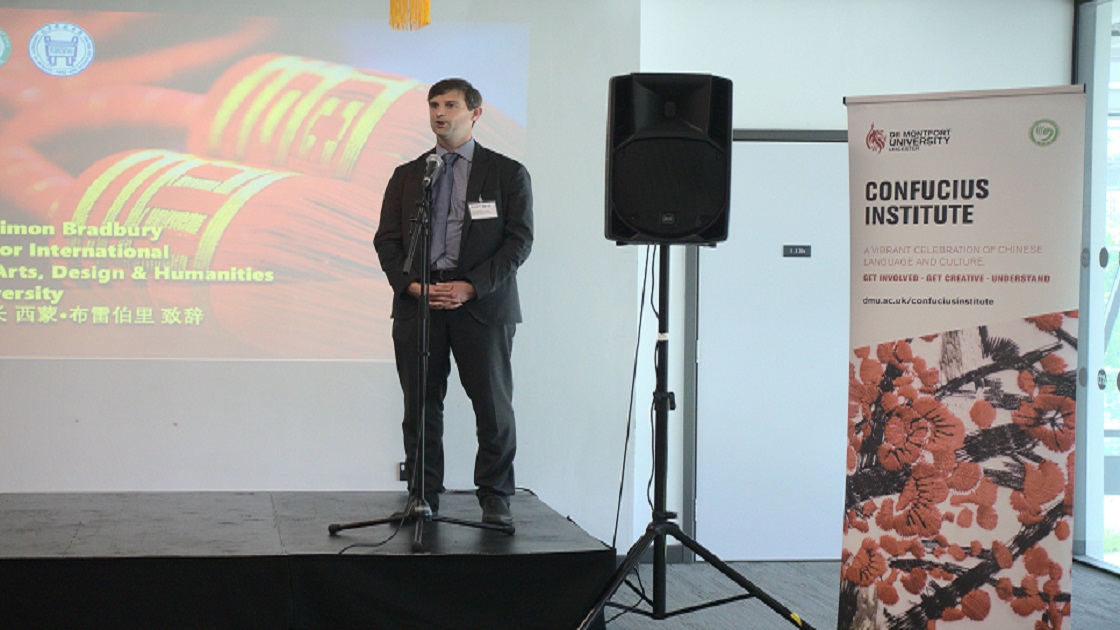 CI Director YANG Yingjun read out the letter of greetings and thanks from USTB President YANG Renshu to DMU VC Normington and the CI for participating in the 70th anniversary of USTB. President YANG applauded the CI’s role as “an integral part of the DMU Global program, as a “strong common bond” between “our two great universities”, and its positive contributions to so many multi-faceted programs and events between USTB and DMU in the past eight years. He is looking forward to further growth of the CI and more cooperation between the two universities. 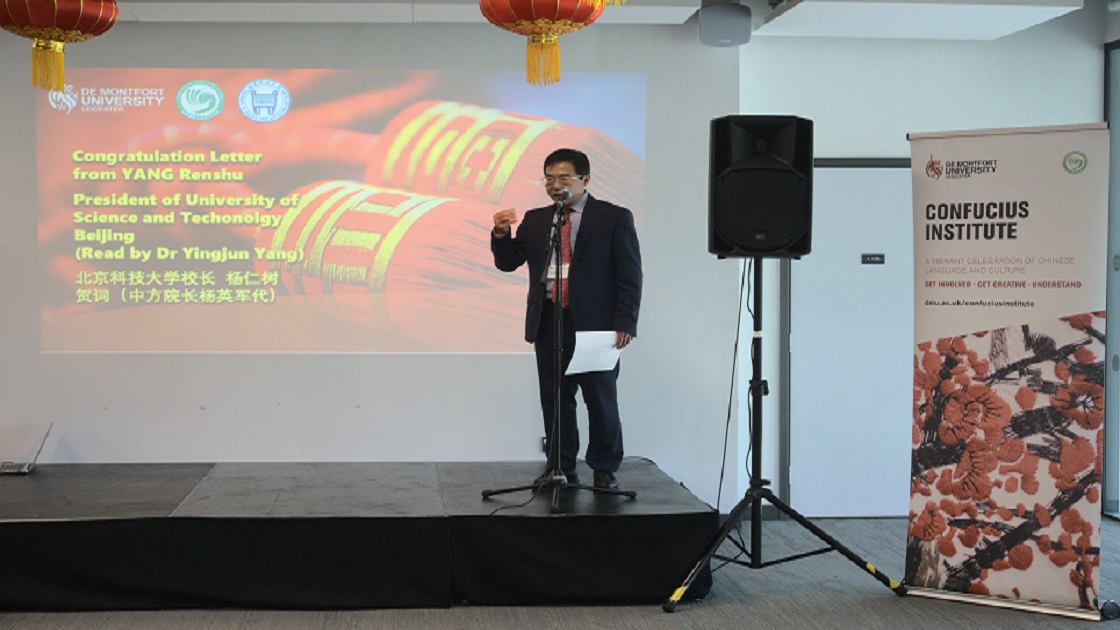 Executive Director Kate Gerrard read out the letter of congratulations from ZHAO Lingshan, Vice President and Secretary-General of the Chinese International Education Foundation. The letter conveyed gratitude to DMU and USTB for their sincere cooperation and to friends for their long-standing support and contribution to the CI. Professor ZHAO commended the CI’s success at “meeting the growing demands of Chinese learners to the utmost degree, contributing to local cultural diversity and harmony, and improving its recognition” with diversified and multi-level teaching programs and high-end events like painting exhibitions, etc. Such “extraordinary and irreplaceable contributions to the educational and cultural exchanges between China and the UK” facilitate mutual understanding and friendship between the two peoples. 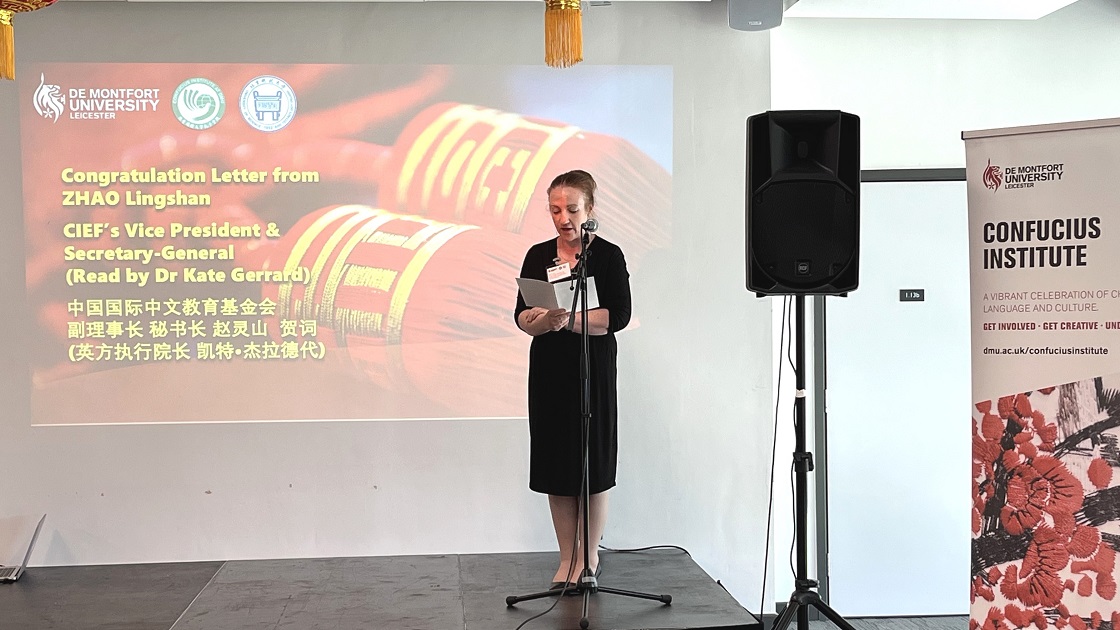 All at the event also watched the CI’s award-winning video at the 2022 UN Chinese Language Day Overseas Video Festival (https://www.dmu.ac.uk/community/confucius-institute/language-and-culture-resources/culture-sharing.aspx). It was the CI’s pure serendipity that early morning on the day of the celebration, the unclipped video (https://mp.weixin.qq.com/s/u9seNeRm-lkUJ11Zs3cszw) began to go live on CMG (China Media Group) major new media platforms globe-wide. What a double blessing! 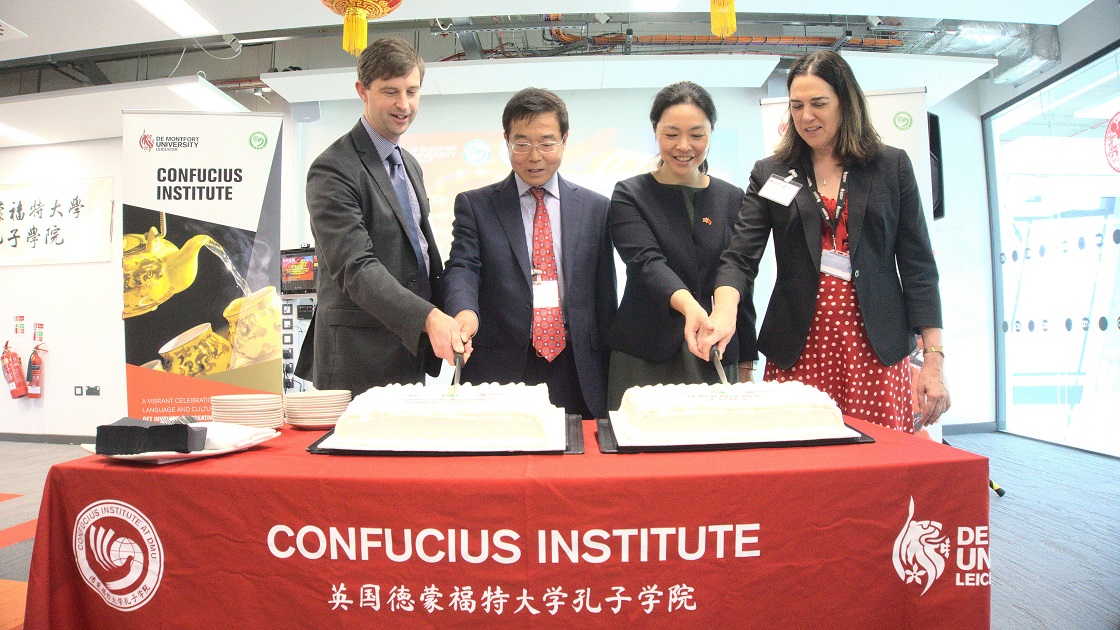 The climax of the celebration came when all witnessed the birthday cake cutting ceremony and took photos to mark the occasion. They enjoyed the birthday cake and Chinese food while watching the wonderful traditional Chinese long-sleeve dance and Tai Chi Fan dance. 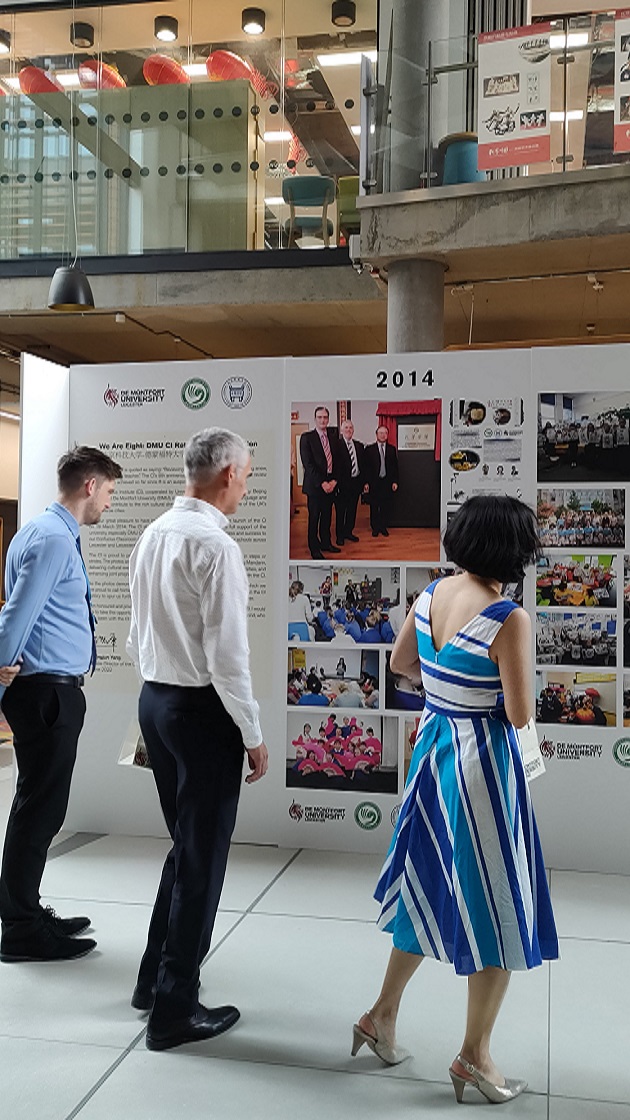 The celebration also marked the launch of the three-week photo exhibition of the CI’s eight-year achievements and the start of a series of wonderful Chinese cultural activities for a week. E-celebrations will continue on the CI webpages at DMU (https://www.dmu.ac.uk/ci)