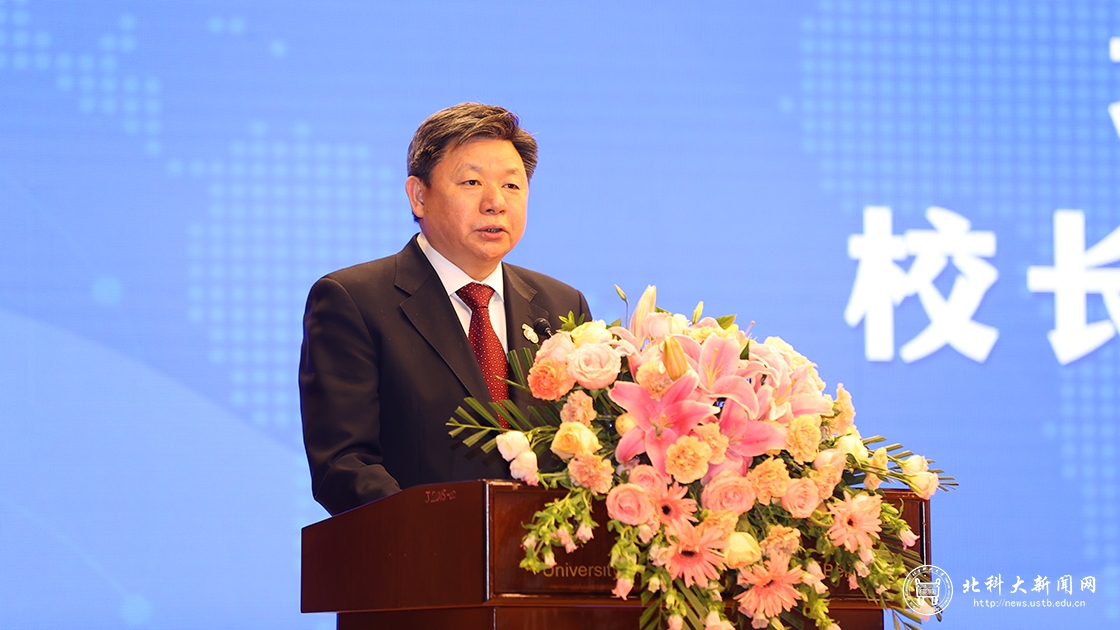 Prof. YANG Renshu delivered his speech at first. On behalf of USTB, he welcomed all the academicians and guests and thanked them for their support and attention to the “WEI Shoukun Science and Technology Education Award”. He said that at the time when the “Double First-class” plan is being promoted, the pilot program of “Sanquan Educational Reform” has been carried out, and all members of USTB are striving for the “14th Five-Year Plan”, especially at the time of in-depth study and implementation of the spirit of President XI Jinping's reply to the senior professors of USTB, the ceremony of the “WEI Shoukun Science and Technology Education Award” is timely, significant and far-reaching. Prof. WEI Shoukun's rigorous academic attitude and noble character are fully demonstrated in his participation in the establishment of the Beijing Institute of Iron and Steel Engineering, his running of the institute, his teaching, scientific research, nurturing of students, and his leading role in the development of China’s metallurgical industry and other aspects. USTB will continue to take the “WEI Shoukun Science and Technology Education Award” as a platform to study WEI’s vast academic achievements, especially his rigorous academic attitude and his modest and great education conviction. Yang Renshu appealed to all experts that they will continue to pay attention to the review of the “WEI Shoukun Science and Technology Education Award” and support the development of USTB. USTB will take the opportunity to further study and implement the spirit of the important reply from President XI Jinping to the senior professors of USTB, further learn from the glorious spirit of the old generation of scientists, and continue to work hard to make greater contributions to achieve sci-tech self-reliance and self-strengthening at higher levels and the great rejuvenation of the Chinese nation. 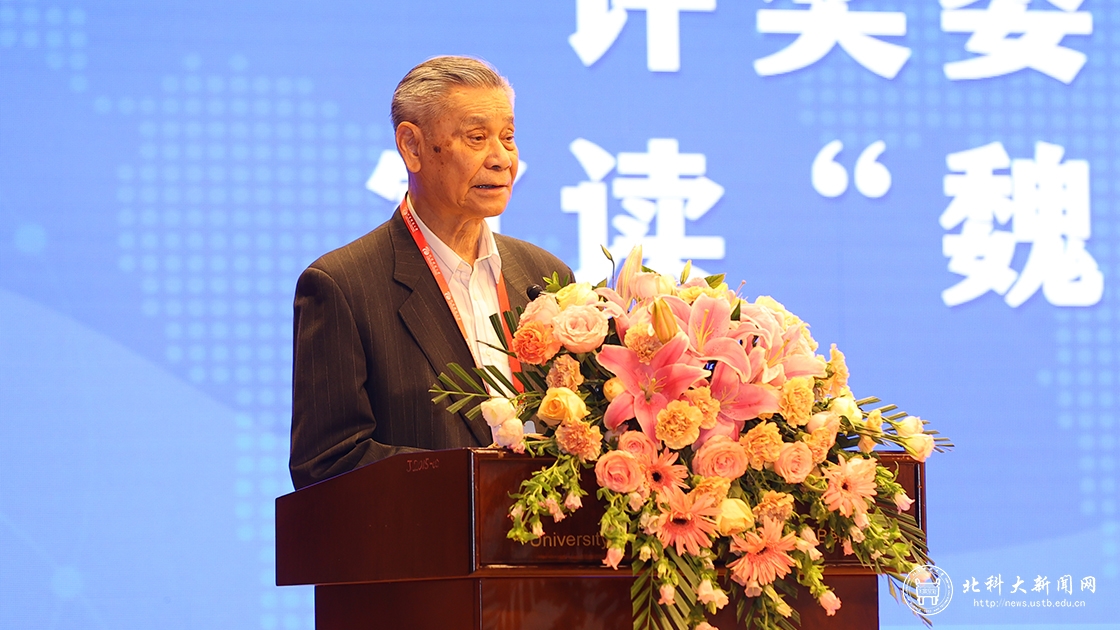 Prof. YIN Ruiyu read out the list of winners

Afterward, Prof. YIN Ruiyu, on behalf of the 6th judge committee, read out the list of the award winners. After the evaluation and publicity by the committee, Academician LIU Jie of Ansteel Group won the 6th WEI Shoukun Metallurgical Award, Prof. WANG Qiang of Northeastern University, and Prof. WU Liyun of Shougang Group won the 6th WEI Shoukun Youth Metallurgical Award. Prof. YIN Ruiyu presented certificates and medals to the winners or their representatives.

In his acceptance speech, Prof. LIU Jie recalled his unforgettable campus life at USTB and WEI Shoukun’s profound influence on him and expressed his sincere gratitude to Prof. WEI Shoukun, the judging committee, his alma mater USTB and Ansteel Group. Prof. WANG Qiang was deeply honored and encouraged to be recognized by the jury committee. He will continue to work hard for the development of metallurgy in China. Prof. WU Liyun thanked Shougang Group for providing him with a working platform and sent his best wishes for the 70th anniversary of USTB and its future development.

Prof. YIN Ruiyu extended his warm congratulations to these three winners and made a closing speech. He recalled Prof. WEI’s influence on him, introduced WEI’s fruitful academic achievements and noble characters, and expressed his sincere gratitude to WEI and his wishes for to “WEI Shoukun Science and Technology Education Award”. He also made his best wishes for the 70th anniversary of USTB and the better and faster development of USTB. In particular, Prof. YIN Ruiyu raised high expectations for the implementation of the spirit of President XI Jinping's important reply to the old professors of USTB. 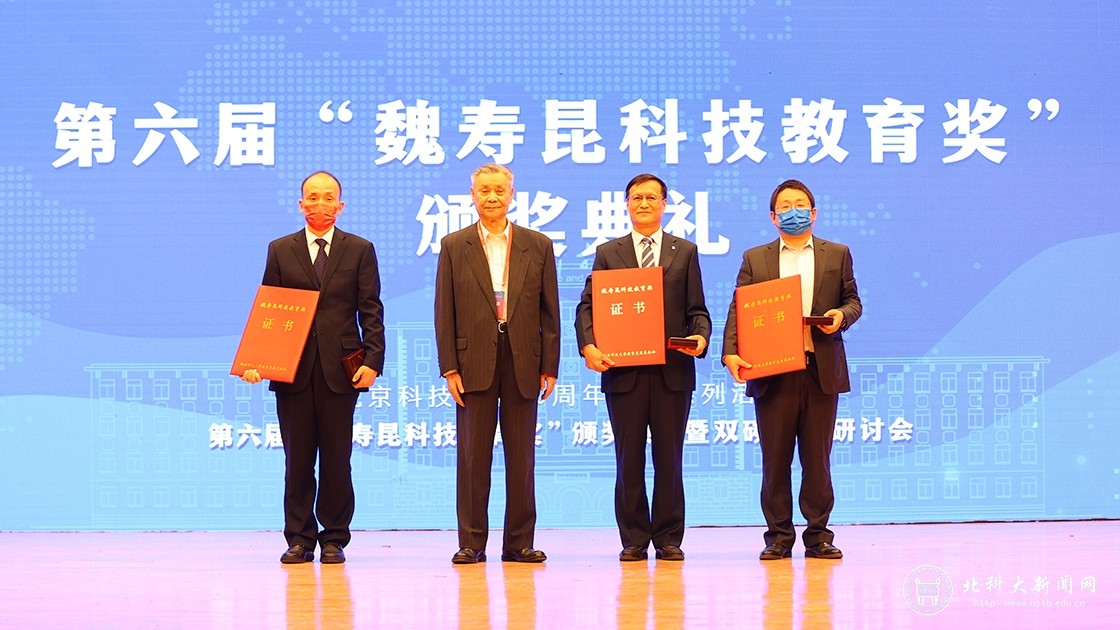 Group photo of Prof. YIN and the award winners 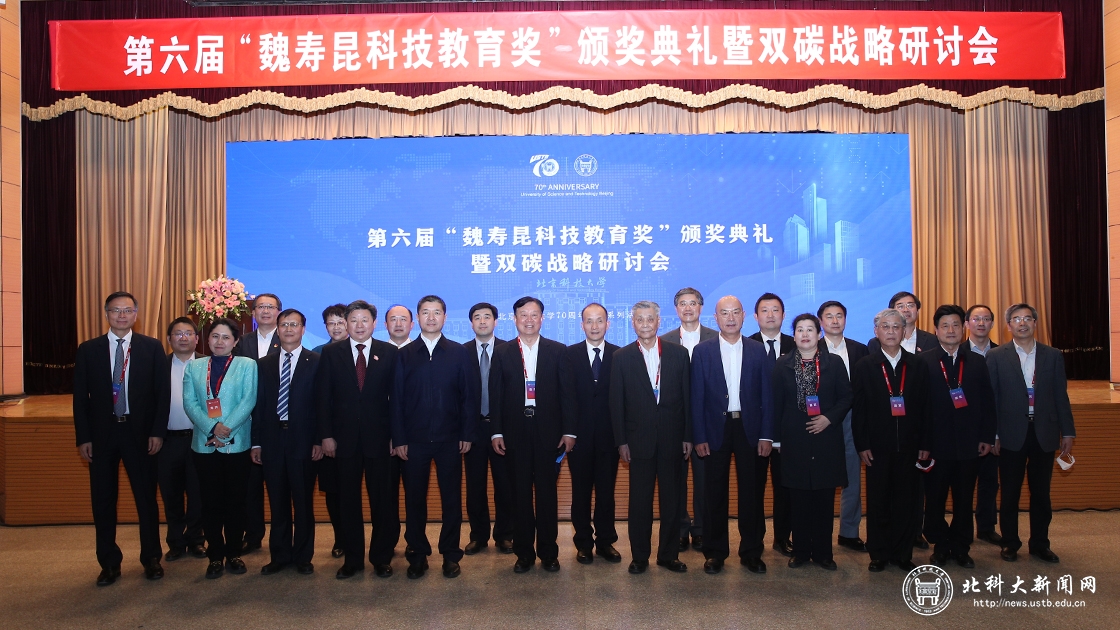 Prof. WEI Shoukun, a famous metallurgist, educator, and senior member of the Chinese Academy of Sciences, is the founder of the discipline of metallurgical physics and chemistry in China, and one of the founders of USTB. In 2006, USTB founded the “WEI Shoukun Science and Technology Education Award” on the occasion of his 100th-year birthday. Since 2009, it has been held five times.